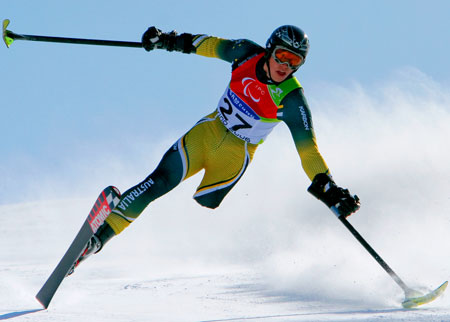 The Paralympics – often mistakenly called the Para-Olympics – are for elite athletes with physical disabilities.

An alpine skier who’s visually impaired relies on her guide as her “sight” to stay on course. A soldier who lost both of his legs in Iraq races on prosthetic legs in his first Paralympic competition. A Nordic athlete swaps her wheelchair for a sit-ski for the 10 kilometer classic cross country race.

Along with visually impaired (VI), amputee and spinal injuries, athlete disability categories include Cerebral Palsy, which affects movement, reflexes and posture, as well as “les autres,” encompassing physical disabilities such as Dwarfism and Multiple Sclerosis.

“Every day, every year, every Games, we continue to break thresholds and increase in excellence,” said Charlie Huebner, Chief of Paralympics, U.S. Olympic Committee. “Competitors are getting stronger, sports are developing and performances are phenomenal.”

13 women and 37 men will represent Team USA in 2010, and while they certainly have podium potential, Huebner says that “having the team represent our country and perform at the best of their abilities is what success will be.”

“With physical activity comes engagement,” says Huebner, “and we see every day how being integrated as part of the peer process has positive social impact on those individuals.”

Continued emphasis on developing programs around the country will help the organization grow from 114 clubs today to their goal of 250 by 2012. And with that growth, chances are we’ll see a natural pipeline of elite athletes who may one day aspire to Paralympic dreams.

While U.S. broadcast of the Paralympics does not yet match that of the Olympics, coverage continues to improve thanks to increased interest from the American public, and increased support from individual and corporate sponsors.

This year, you can catch Opening Ceremonies and recaps on NBC Sports and Universal Sports: