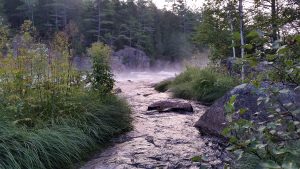 I think about wild places – mountains, rivers, trails – the way most people think about old lovers. I’ve lost sleep for months now thinking about the West Branch of the Penobscot River. This river’s been on my mind and anyone that knows me would say that’s how it always begins…an idea becomes a vision, then a drive, turns into a plan and ends up an experience. Usually it’s new places that fill my imagination, but I know this river. I have history with this river (not to be confused with unfinished business).

The Penobscot’s North, South, East and West Branches makes it Maine’s longest river. Its East and West Branches unite in Medway, a small town you’ll pass on your way to Millinocket, another small but important town to anyone who’s worked this river. I spent two years guiding the West Branch, met one of my most cherished girlfriends here, flipped my first raft here, was scared shitless when I had to R2 from the gorge (which holds the first Class V rapid known as Exterminator once you break through the discharge of Ripogenus Dam) and learned what it means to be recirculated. When I close my eyes I still see the lines through Ripogenus Gorge and Cribworks (or the “crib,” the next Class V) and still remember the lump in my throat when I realized I would be the first in my training class to run them. This river is life. The gorge is a mile long vein that pushes energy ahead, without permission or apology and even though the dam controls the release of water, this river will find ways to remind you of its power when you least expect it. Under the eye of Katahdin, Maine’s largest peak, it accepts rafters, boaters and fisherman into itself like an aunt you haven’t seen in years – it’s not just me. The energy of this place pulls thousands of people here each year and now, this summer, I won’t be able to stop thinking about it until I stand in it, belly deep, fly fishing, in solitude, under the early morning sun with a donut from my grandmother’s kitchen and coffee sitting on my car waiting. My body craves the energy of this river more than the sugar and fat in that donut, but I will have both. 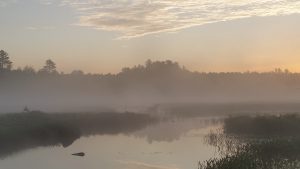 I don’t believe it is coincidence that since June I’ve craved wild places and solitude more than usual. Although my birthday is next week, it does not mark the beginning of a new year for me. My new year started June 3, 2018 when I learned that my liver, in the form an autoimmune liver disease, was doing some serious battle against an imaginary enemy within my body. Simply put, my body has been trying to break up with me. I’m trying to make up with her but she’s making me work for it (sounds like me).

In May I moved into a camper and began working hard to practice simplicity and minimalism in all things – from relationships to belongings. A culling of sorts. These weren’t new ideas or practices to me, it’s just that I had an uncommon opportunity to commit to those beliefs in a way most people don’t. Then June came in hot with an angry, confused liver and in doing so, changed, at least for the time being, what a wilderness-based, adventure-filled life looked like for me. I experienced for the first time in my grown-up life what it means to be afraid and unsure. Over the last few months, I’ve developed new ideas about language, joy and wilderness and their role in my life. I believe in the power of language, for example, and words like disease, illness, and remission have never been part of my vocabulary. This hasn’t changed. Rather, joy, adventure and wilderness have become my language of life and healing. I believe in the power of joy – not just that it makes you smile or fills your heart, but that it can change you on a cellular level, your very DNA. I know it, in my bones, to be true the same way I knew I could never say how a day on the river would turn out. I believe in the healing energy of wild places so when my body decided it needed more of both, the rest of me had to oblige.

I have done what the doctors advised, taken what they’ve prescribed, but then set about the real work of healing. In doing so, I have come to give thanks for the good days and even though I’ve come to know what a hard day can feel like, I choose to give thanks for the strength I do have. It’s led me to a fly rod, after wanting to learn for years. It’s led me back to the Penobscot.

I might never learn the difference between a muddler and a streamer, or get beyond the basics of a dry or wet fly, but that’s ok – it’s led me to laughs with my Uncle as he let me know that line was a little close to his ears when it went by, we’ve tested the strength of canoe repair tape on the fly, so to speak, with me promising to get him to shore if we swam. He pulled down the hand-made wooden canoe, a gift from his father-in-law who lived in Millinocket – the same town I lived in when I guided the Penobscot and for which anyone who loves this river spends a great deal of time – that he hadn’t used in years. There is a symmetry to all that which brings me even greater joy – like a confirmation that my body was right all along. We went looking for places he hadn’t visited in ten or more years, to find the logging roads have changed just enough that you have go by gut-feel instead of landmarks, and stood in the falls of the Saint Croix River as I caught my first fish. So, each day I try to find the grace to understand that this challenge in front of me is just that – a challenge, a different sort of adventure. Not one that involves a full face helmet, goggles, downhill bike, trail running shoes, fly rod, or a snowboard. One that requires I ration energy and time the way other people ration money or food. I am still committed to finding the best version of myself possible, and that, for most of my adult life, has always been found in the wilderness – mountains and trails. The Penobscot, though, is pulling me back – a recirculation of sorts, and expanding my notion of wild, healing energies. That’s an adventure I will happily pursue. 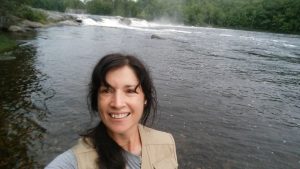 One Response to :
Wild Places