In the late 1960s and 70s, the male-dominated climbing establishment shunned Arlene Blum. During a time when women weren’t welcome because they couldn’t carry heavy loads or handle the effects of high altitude, she was ostracized for her sex alone. Hard to believe, that was less than 50 years ago. 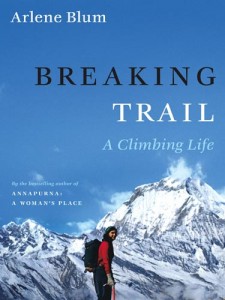 Blum’s Breaking Trail: A Climbing Life tells her story of lost opportunities – both in the mountaineering world and her own upbringing – that led to accomplishment.

In many ways, she’s the “every woman,” describing trouble with relationships, how to balance a desire for adventure with career and financial needs, and family struggles that created both insecurity and drive.

On the other hand, Blum stands alone in her experiences. She received her PhD in chemistry, conducted protein folding studies that contributed to breakthroughs in AIDS research, and investigated flame retardants in kids’ sleepwear, helping to ban the use of such carcinogens. Alongside her academic feats, she also broke trail for female mountaineers: she led the first women’s climbing team on Denali (“The Great One”), was the first American woman to attempt Everest and set a world altitude record for American women on Annapurna I.

What sets this book apart from other mountaineering memoirs is Blum’s humility. Instead of just highlighting the positive chapters of her life, like the epic climbs and firsts, she weaves together her full story, from the pain, anger and isolation of her childhood living with her “three parents” (mom, grandma, grandpa), to the emotional roller coaster of guilt from losing so many friends to avalanches.

Her fear and vulnerability create a well-rounded account, offering a glimpse of how she’s come to terms with mountains as both adversaries and havens. As she dreams up her “Endless Winter” of climbing in Africa, Afghanistan and Nepal (shortly before they became inaccessible to foreigners), completes the “Great Himalayan Traverse,” and tackles each new peak, we learn that she is happiest “in high places.” She writes:

“Climbing the ridge was an extreme meditation, thinking about my breathing and moving with focus, concentration, and harmony. Where I placed my foot determined whether I lived or died. Future plans, past regrets, and the normal clutter of my mind were silenced. I felt a sense of peace and distance from the world reminiscent of that I’d found as a child up in our cherry tree or in the vacant lot watching the clouds.”

With the extraordinary mountains as her backdrop, Blum’s insider look into both an international family of climbers and the local people in these remote areas demonstrate an appreciation for human nature that puts her own triumphs in context.

As her Sherpa friend shared, everyone needs “something to do, someplace to be and someone to love…for a happy life. If one leg is missing, the tripod is not stable.” Blum’s candid articulation of this quest is accessible and compelling, making Breaking Trail a page-turner for both its high-altitude expeditions that characterize every great adventure read, but equally so for Blum’s introspection that ranks it among the best memoirs.