Less than two years ago, Washington native Niki Koubourlis was working 12- to 14-hour days in commercial real estate in Dubai. But the safe, secure life she had built wasn’t making her happy. Seeking outdoor adventure, she moved to Denver in 2013 and launched a (now 500-member) meetup group and a brand new business renting outdoor gear and apparel to women, both called Bold Betties. 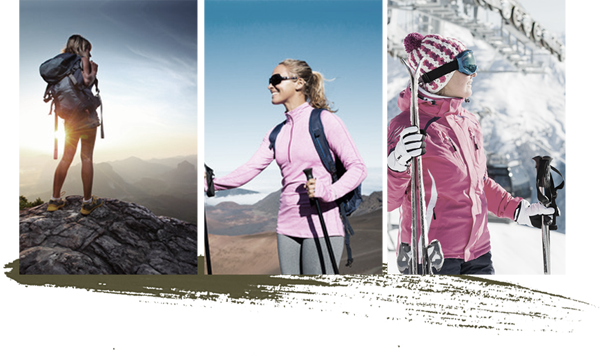 How did you come up with the idea for Bold Betties Outfitters?
It started when I hiked the Inca trail in May 2013 with one of my business school friends. When we were on the hike, it was pretty funny because she and I were in the tent putting on mascara! I observed that there were two different types of women on the trail. There were the girls who were there with other girlfriends who had clearly done stuff like this before and were having a great time. And there were other girls who were there with a husband or boyfriend and they looked miserable. I talked to a few of the unhappy ones and found out that they didn’t really know what to expect, so they weren’t prepared for it. They didn’t have the right clothes or gear.

My original idea was to write a guide called The High Maintenance Girl’s Guide to the Outdoors. But then I thought that was very limiting, to just do one book and that’s it. I put the idea away, and around that time I moved to Colorado.

Just talking to women, I learned what some of the main deterrents were—and cost was the biggest one. I was familiar with the Rent the Runway model and thought that it was a great business model, a great way to get the product into the hands of people who couldn’t afford it otherwise. It seemed natural for that same model to apply to the outdoors, because everything we need to participate is pretty expensive.

Can you talk a little bit about the Bold Betties meetup group and how that fits in with your business?
I started the group last summer, because there were things I wanted to do in Colorado but I didn’t know anybody. I don’t profit from it. But I will continue to do the meetup group as long as I have the time and it makes sense because I get so much joy out of that. It’s been a great learning ground to figure out what’s important to my target market and really shape the whole offering based on that.

Coming from the corporate world, how does your old lifestyle compare to your new one?
In my old life, I was working fourteen hours a day, six or seven days a week. I had no time to explore hobbies or interests. I wasn’t spending any time outdoors because I was pretty much chained to my desk. But I had all the money in the world to buy stuff. In order to compensate for what I was missing in my life, I would spend my money on material things. My lifestyle was pretty much working and spending money on stupid stuff.

Now, I work just as much, but I’m working on something that I’m passionate about. It’s my baby. I spend tons of time outside. I get to try new things. I get to work with women, which is awesome. Right now, my life is just so much more varied in terms of the people I interact with, the things I do, and how I spend my time. There was a long period of time, probably fifteen years of my life, where everything I did was motivated by security. And now my primary motivation is passion, because I feel that’s a much better way to make decisions. I thought that having security would make me happy. I had that, and I was empty.

How does your experience in corporate real estate inform your current business?
In my former job, I evaluated investment and development opportunities to decide if they were worth pursuing. That ability was very helpful in evaluating my business idea, developing the business case, and writing the business plan. I hear stories of entrepreneurs who have a “great idea” and just start going after it and spending money on it without thinking through all the details. The processes of analysis and business planning forced discipline on me and that was very helpful when deciding to pursue BBO.

Also, as an investment/development executive in commercial real estate, I was often the only woman in the room. The startup community and certainly the outdoor industry are also male-dominated—at least in my experience thus far—so it might have been more intimidating pursuing my dream in these arenas had I not had that experience.

You describe yourself as a girly girl. Why did you decide to seek out a life of adventure?
A little over two years ago, I found myself overweight because I had spent the last three years sitting in a chair. I had no time to work out. I was self-medicating with food and alcohol. I was very depressed, and I was in a marriage I knew I wanted out of since our first anniversary. And we were already beyond our fourth at that time. I felt stuck.

The first thing I did was to join a weight-loss program, and carry out a 90-day clean eating and exercise program. That gave me a lot of confidence, because when you set a goal and you work for it and actually accomplish it, you get a sense of “I can do anything.”

When I completed that, I got divorced. Which was a big deal to me because it took me four years to have that conversation with my husband.

I realized that I had been a passenger in my own life. I wasn’t at the wheel, I wasn’t active, and I was going through the motions. I didn’t want to live the rest of my life that way.

What have you learned from your experiences in the outdoors?
I’ve learned what I’m capable of. When you’re frightened of something and then you do it, your confidence expands. Being bold makes you want to be even bolder. It’s infectious and addictive. It’s shown me that making my decisions based on passion is okay.

Why do you think it’s important for women to engage in outdoor adventure?
A lot of us think that we have to have a man involved to instigate or to do things outdoors with because we can’t survive on our own in the backcountry: We don’t know how to start a fire or pitch a tent; we don’t want to carry all that stuff. But once you start doing that stuff either on your own or with a group of girlfriends, you realize that you can. It gives you a sense of independence, which I think is important at any age.

Plus, we all want to make friends. The relationships I’ve built while being outdoors are strong sources of empowerment and all the things you want out of your female relationships.

What do you think are the biggest barriers to being active outdoors?
One is the cost. This stuff is expensive.

Two is the intimidation factor. The industry perpetuates this extreme masculine idea of who participates in these activities and whom they are creating these products for. Even the images of women are of buff, strong women who don’t look like you and me. If that’s what you see and that’s the impression you have, you’re automatically turned off because you think, “I’ll never look like that or be able to do that.” Just going into REI can be intimidating because they might be using jargon you’re not familiar with. And you might not be comfortable showing your ignorance, so you just continue to nod your head and get out as fast as you can.

Number three is not having the right people to do it with. For the women in my group, it’s really helpful to have women who are in the same boat. There are no rock stars. Nobody is competing. You’re not going to feel bad or inadequate because you’re not moving at the right speed. Making outdoor activities as comfortable as possible is important.

The fourth thing is logistics—figuring out what gear you need and coordinating a group. Having someone else set it up and say all you have to do is show up at this place, at this time, makes it easier. It’s enough to get you to go. If you have to figure it all out on your own, that’s a deterrent.

What inspires you most about your job?
Passion is inspirational. Now that I’m in the entrepreneurial community and I get to meet other entrepreneurs all the time, everyone around me is passionate about what they’re doing and that’s super inspirational.

But the experiences I have with my meetup group are probably the biggest things that keep me doing what I’m doing. Because when I get to be a part of another woman’s experience and her overcoming a fear and having success, that’s awesome.

What’s your advice for women who want to try new things outdoors?
A lot of the time, our hesitancy with trying something new is that it requires us to go outside our comfort zone. That seems to be something most people resist fervently. So I encourage people to make it a habit. Start small: Take a different route home from work or try a new food. You can incorporate “new” things into your daily routine and get comfortable trying new things and being outside your comfort zone. This will give you the courage to take that bigger leap and try something you have been more afraid of.